I’ve gotten a bit behind in sharing what I’m working on. My last post was a share of a fellow blogger who was kind enough to detail her Kool-Aid yarn dyeing know-how. Well, I tried it yesterday with clean, uncarded wool. I needed to practice with the stuff before I brought it into my daughter’s kindergarten class to dye wool that they will be using in an art project in a few weeks.

Last week, the children washed raw wool. I wish I could share pictures of it, but you know… privacy and other people’s children is very important to honor! Let me just tell you it was funny, wonderful and I was so proud of all of them. It is true that there was a lot of “ewwwww!!!!” and “gross!” and “it smells like poop!”, but I can assure you that there was no poop in the wool and once they realized it was kind of like petting sheep, they got over it, and all of the kids wanted to put the wool into the warm, soapy water.

I had to do a few rinses of the wool once I got home because there just wasn’t time to get it all done at school.

This week I’ll bring some of that washed wool back to school to have them dye it. I was stumped when I was trying to figure out how to expose them to wool dyeing- I have gotten really into plant dyes and have done some dyeing with synthetic products, but those are stinky, kind of complicated and very time consuming. Somewhere along the way, I came across a mention of Kool-Aid dyeing, but when I first started researching it, I found a lot of links to directions involving heat, stoves and time. That’s why I was so excited to find this link. 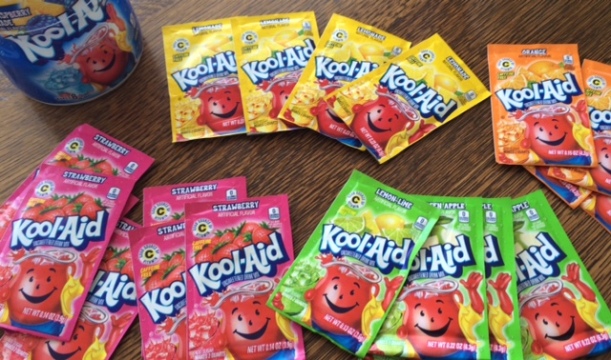 I tried it myself yesterday and loved the results. This is what I did:

I separated my wool into weighted amounts: 4 2 oz piles and 1 1 oz pile. I then soaked the wool in warm water for 30 minutes. While the wool was soaking, I got my dyes set up. 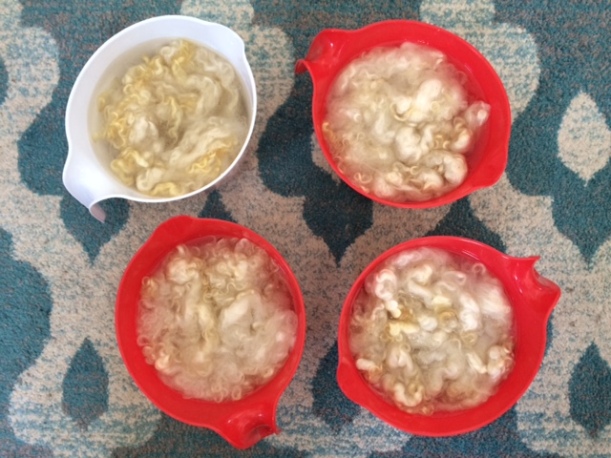 I had three half-gallon mason jars and one one-quart mason jar.

In each of the three large mason jars, I put four packets of Kool-Aid, 1/2 cup of white vinegar and filled them about half-way up with warm water. I then stirred the mixture well. 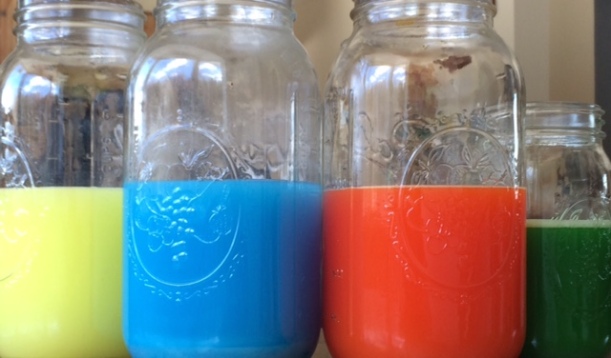 In the one-quart mason jar, I put two packets of Kool-Aid, a 1/4 cup of white vinegar, and half filled it with warm water.

I had an extra glass bowl hanging around and put three packets of raspberry Kool-Aid in that, along with 1/2 cup of white vinegar and some warm water.

Once the 30-minutes of soaking was up, I put the wool in their respective jars and bowl, added warm water until the wool was submerged, covered the jars and bowl and then put them all in a sunny spot for about 4 hours. 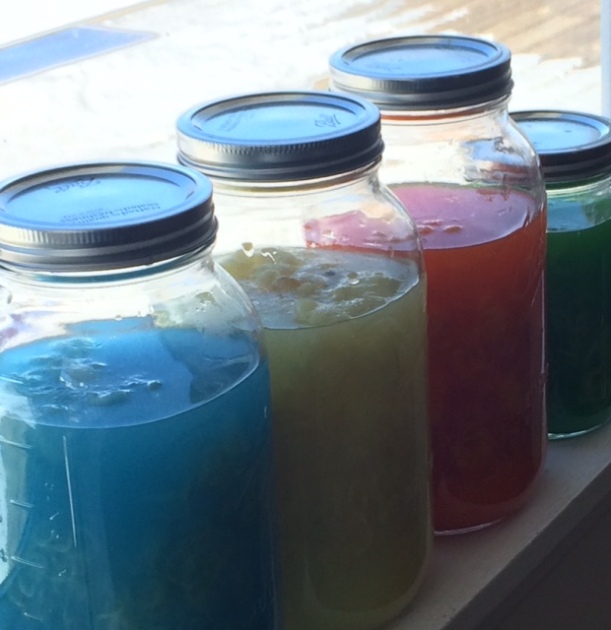 When I was happy with the color absorption, I pulled out the wool and rinsed. I was delighted with the results and know this will be wonderful for a classroom experiment/project. The color was not totally spent in the dye bath; I’m not sure if that’s because I used too much Kool-Aid for the fiber that was in the bath, or if I didn’t leave it in long enough.

I am so excited to do this with the kids next week. I’ll let you know how it goes. 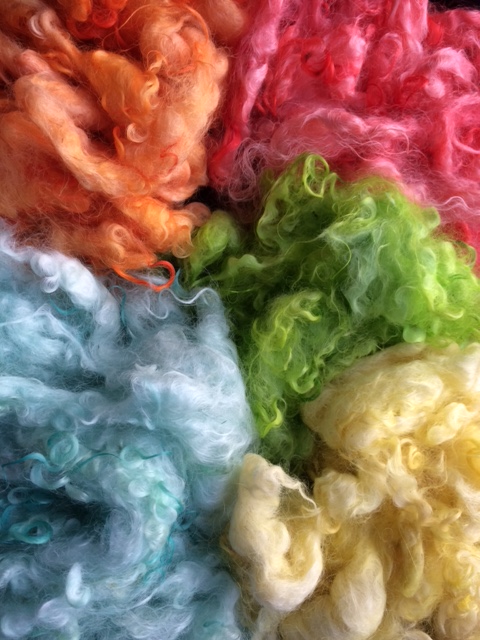 I’m doing a little research on how to easily dye wool with Kool-Aid in my daughter’s class. This is such a great and simple explanation, and I love that the class will get to watch the process over the course of the day! So fun! Thanks for this information!

Someone asked that I detail the process for anyone who was interested in doing this at home, so here you go, Susie! 1 quart jar
2-4 packets of KoolAid in colors you like
white vinegar
water
undyed yarn (I used 1/2 of this: http://www.knitpicks.com/Bare+Peruvian+Highland+Wool+Yarn_YD5420101.html   for each of my students)

1. Wind your yarn into a very loose skein and soak in warm water for at least 30 minutes. This step makes sure all the yarn fibers are saturated and better able to accept the dye.

2. In the quart jar, mix the KoolAid powder with 1/4 c white vinegar and then fill the jar to the half way mark with warm water.

3. Put the sopping wet yarn into the jar.  If you want a more even dye, make sure the yarn does not get smooshed up against itself or the jar.  You may want to use…

It’s been busy. But not the same kind of frantic busy I was experiencing leading up to the holidays. That got bonkers. I seriously need to work on chilling the hell out in the months leading up to the holidays; has it always been like that? I don’t remember my parents seeming frantic when I was a kid pre-Christmas. Maybe they were and just hid it, or my siblings and I were comfortably and age-appropriately self-centered enough to not realize all that was going on for our folks. I don’t know.

I am now fully committed to getting real peaceful with what I can do and what I can’t,  and what I want to do and what I don’t. I’ve definitely been reckoning with the fact that I could have done many different things in my little life, and that I’m a person with a bunch of interests. I’m often grabbed by something- an image, a topic, an idea, that with infinite time and energy I’d maybe be able to do something with. But I don’t have infinite time or energy, and I have certain commitments and have made certain love-filled promises that remain firmly at the top of the what I am doing list.
Anyway, I’m noticing that busy-ness is not feeling freakish of late. I think maybe after paring down and getting realistic, the responsibilities and endeavors that keep me busy feel much more grounded in the truth of my skills and my limits. Melancholy and peacefulness can live together, surprisingly. Letting go of desired but untenable pursuits is sad, but the process of doing so opens up energy and time to do what’s right in front of me, what is fueled by inspiration and honesty.

I guess those are my thoughts on this chilly Wednesday. 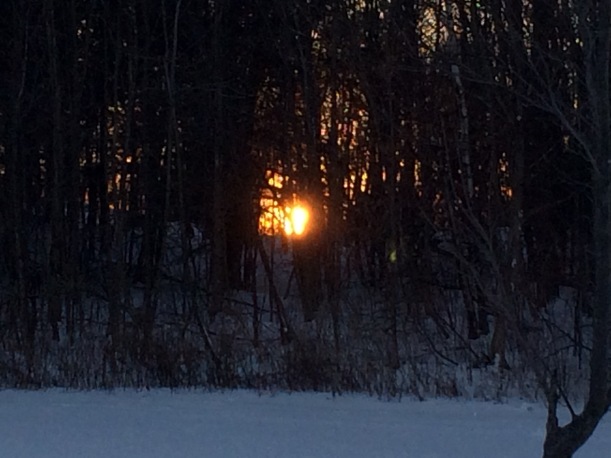