“A true friend is someone who thinks that you are a good egg even though they know that you’re slightly cracked.”

I like this quote. It is on a card that I bought a while back because I loved it, and it made me think of the friends I have that have kept being friends with me, even after they’ve seen the really me.  I thought about things kind of like this as I made a small circular weaving piece over the last few days. The warp thread in this is strong and sturdy. (The warp is the thread or yarn you attach to the frame to hold the tension and to give you something to weave around). When I chose it, I knew it wouldn’t break as I wove the weft yarn through. (The weft is the yarn that you weave over and under the warp thread). Here’s the thing about some of the weft yarn I used. First of all, I used almost all handspun, the majority spun by yours truly. Some of what I chose is from a skein I made using a lot of different fibers. There is wool roving in there, wispy locks and cotton from punis. It is strong in some parts and weak in others, and very inconsistent in thickness. I love this yarn. I love it so much it’s hard to use because I don’t want its texture and variations to get lost in stitches. I love how in some places I could pull it as hard as I might in opposite directions and it wouldn’t break, yet in others, it is so fragile that gently tugging on it would result in a tear.

I chose to weave with this special, fragile-strong yarn because it invites feeling and touching, and I knew that the warp yarn would hold it in place. I knew that using a solid, predictable and consistent yarn would protect my at-times-breakable treasure. And it worked. As I wove, I was sometimes able to move quickly, leading the yarn above and below the skeleton yarn without much thought. Other times I had to carefully push the yarn through so it made it to the opposite side in one piece. It didn’t always make it, requiring a quick repair, or a dedicated wrapping around the warp yarn. That extra twist, done by hand, of one yarn around another reminds me of the way sea horses hold on to seaweed to stay safe and secure in strong currents, an entwined tail around a grounded sea plant. It’s the same sort of thing.

The finished product shows the lovely handspun yarn in its full personality. I honored the weft yarn, though. It is the center of the circle. It is strong and sturdy and sits as evidence of what holds the whole thing together, its many arms reaching out to securely hold the frame with confidence.

We can be all of these things, all at the same time within ourselves. And of course we are different parts to different people throughout our lives, sometimes strong and reliable to another’s fragile and inconsistent fibers. We can also be the ones in need of the sturdy frame on which to lean and around which to wrap in times of frailty and moil. It takes both aspects responding to the other with the right amount of tension and just enough give to make a thing with depth and honesty. Mr. Meltzer had it right. 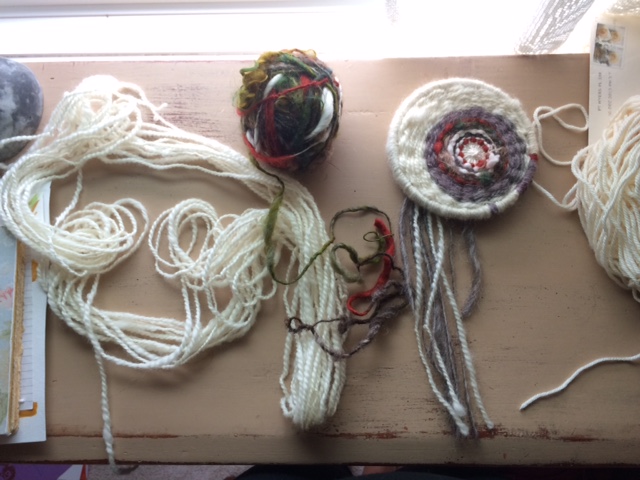 I am a psychologist and a fiber enthusiast. I have a deep interest in the healing effects of handcrafting, and its place in our common histories.