Rather than detail all of the reasons why keeping up with writing has been difficult lately, I’ll show you one thing I spent a considerable amount of time on in the last couple of weeks. It’s crafty. It’s funny. It’s… Animal. 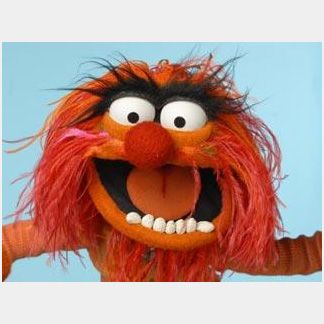 Animal from the Muppets~ this is the real puppet, not mine!

Remember Animal, from the Muppets? I loved him when I was a kid, and I love him now, after spending a bunch of time considering all of the subtleties of his face, his expression, his noisy look. Of course, my animal does not come close to Jim Hensen’s, but oh, I love him still.

My son and I got the idea of him dressing up as Animal for Halloween one evening when he was playing the piano, very dramatically. He was cracking me up, swaying his head back and forth, his longish hair flying everywhere. He reminded me of Animal’s crazy drum playing ways and then and there, we decided it needed to happen. My boy needed to be Animal.

There’s no easy way to just get an animal costume. Can you believe that?! There’s not. Once we figured that out, my fantasy was too far in. I couldn’t reverse course. So, noodling around online, I took a gander at other people’s animal costumes. Paper maché seemed to be something folks tried but that intimidated me. I don’t know why but I think it just seems unruly and like I would just make a big heap of mess instead of a mask. I also found a post about a woman using a baseball helmet as part of the head support. It was from that idea that my mask was born.

After ruminating on the costume for a few days, I went to Michael’s craft store and walked around, hoping to find things that looked like they’d work for costume construction. I ended up with: styrofoam balls, three large and two small red feather boas, fun fur, black, red and orange felt, a styrofoam bowl, a red baseball cap, and glue. 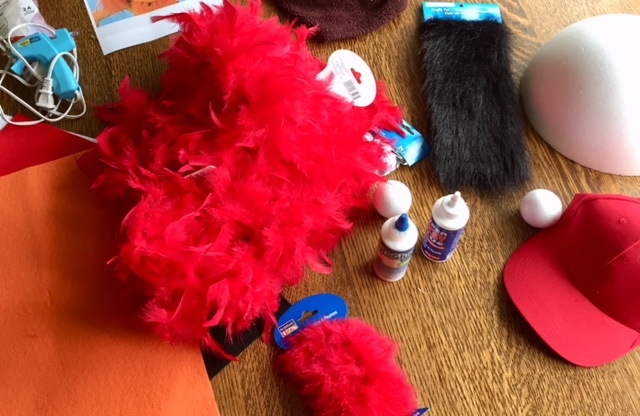 First, I stitched the baseball cap to the styrofoam bowl. The idea here was that the head needs to be large, and there is a bit of a lip where Animal’s upper lip and nose protrude. The rim of the baseball cap provided the structure for that. The stitching here was tricky; if I pulled too hard on the needle, the thread would at times pull right through the styrofoam. Knowing it was going to be totally covered with feathers, I didn’t care about it looking great. It just needed to be functional. The cap, by the way, was fitted on my son’s head before I sewed it into the bowl. 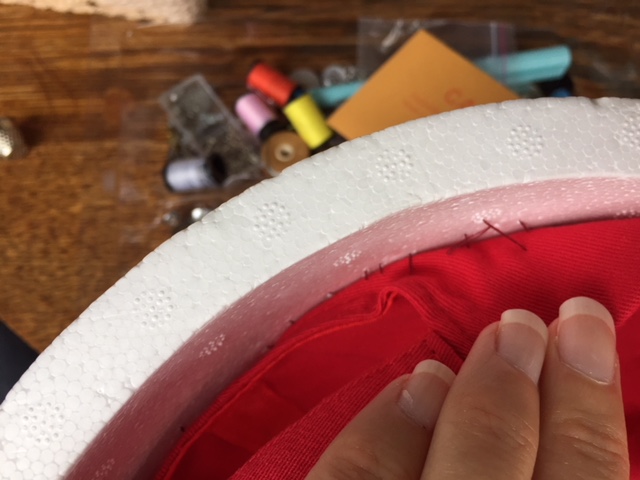 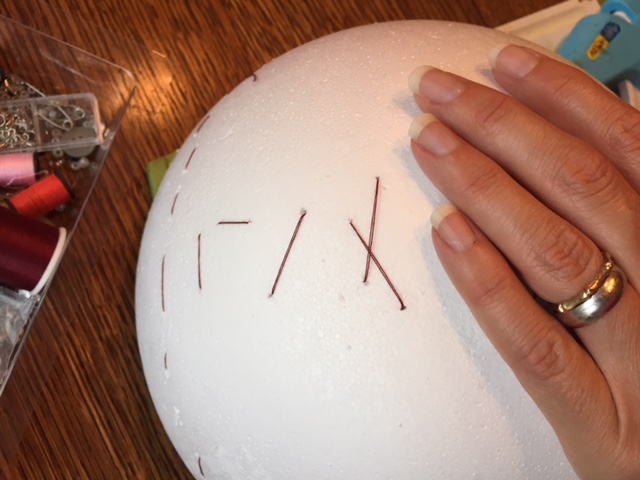 Then, I glued the bowl edge onto the rim of the hat. What in the world did people do before glue guns? 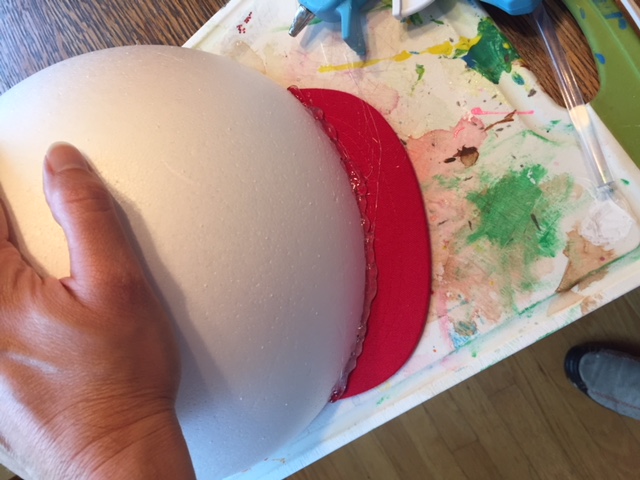 Once that was dry, I began the fun process of wrapping and gluing the feather boas around the bowl. A little messy at times, it’s good to have wet paper towel on hand to get glue off fingers. Feathers seem especially attracted to glue. 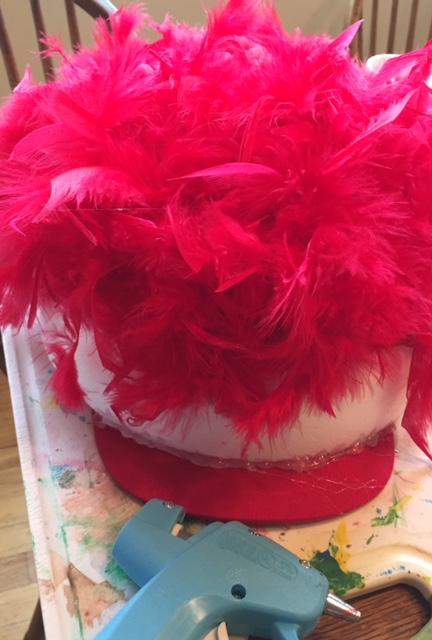 Once I got the bowl covered, I had to start tinkering with the mouth and how it would attach to both the head and to my kid. I apologize now for the lack of pictures of the rest of the process. I tried a bunch of different things. Finally, I settled on using thick paper plates for the structure of the mouth. 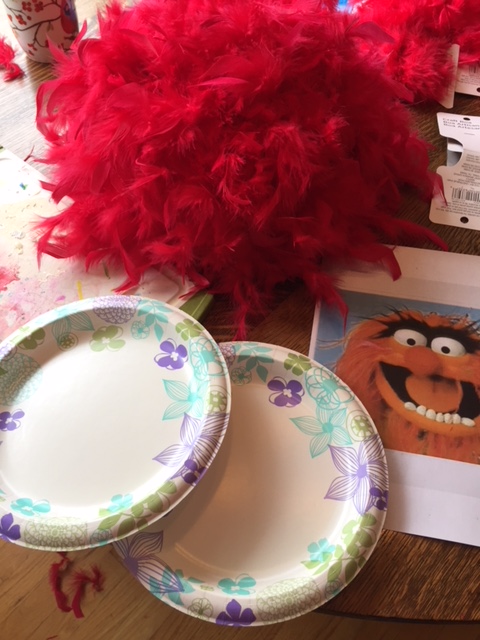 I eye-balled the plate size against the bowl/rim of the baseball hat. The idea was that the mouth would attach to the rim of the hat, and my kid’s face would be behind the mouth. Originally, I thought I’d cut out eye-holes in the black felt I used for the dark part of the mouth, but I changed that later. 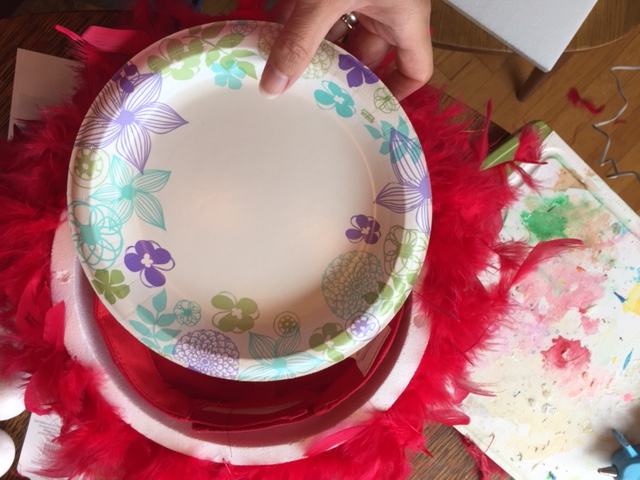 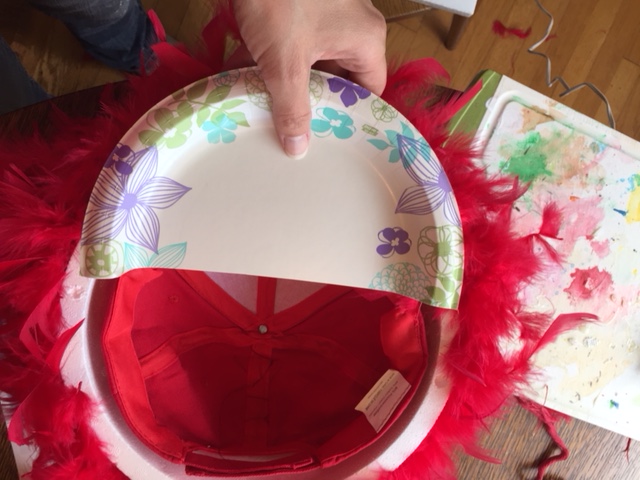 I cut a plate in half and then cut out the flat part of the plate, leaving just the rounded edge of the plate. After a couple of experiments, I opted not to trim the rim of the plate itself (this is not pictured).

Then, I eye-balled the orange felt lips Animal has against the rim of the plate, and after that, the black inside of the mouth. Those pieces were glued to the plate rims. Now, below you see the full mouth where I used the black felt. I ended up using black meshy fabric instead. I included both pics here because some might prefer the darker felt for the mouth. I opted to switch to the see-through mesh because I wanted my son’s face to be fairly free and open, and for him to be able to see easily at night. I made the same kind of paper frame for the structure of the mouth, glued the black mesh onto the paper rim, then the orange felt lips on top. I placed black felt just on the bottom half of the mouth, on which the tongue could be glued. 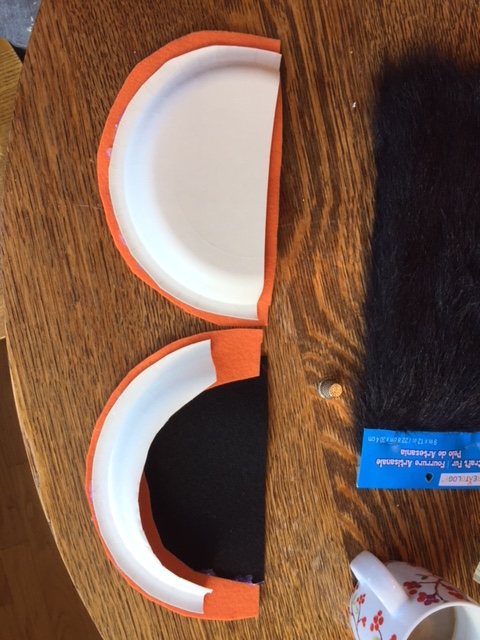 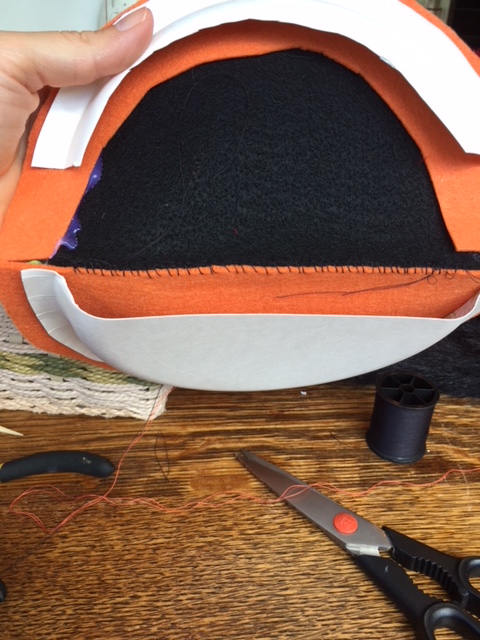 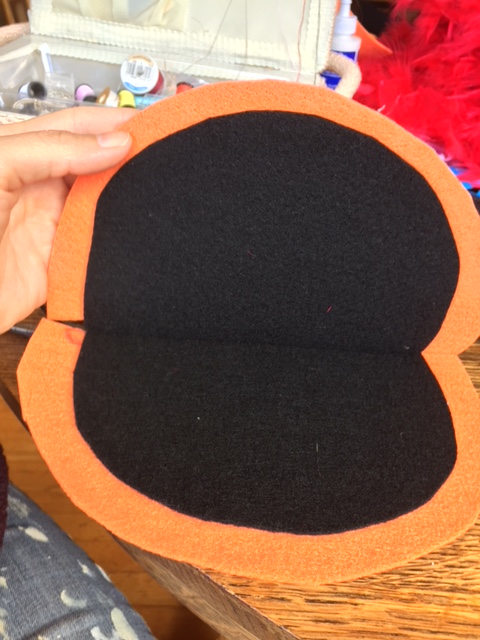 Below is what I ended up with. 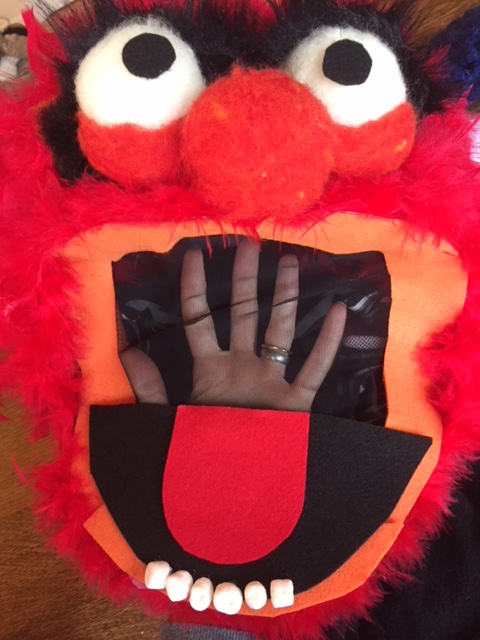 Now, the major tricky part was how to make the head full and round looking. Remember, the head up until this point was just the bowl, which only came halfway down the back of my son’s head. The top of the mouth was glued to the rim of the hat (so sorry there are not more detailed pictures). That allowed for the mouth to stay strong and in place. The bottom of the mouth naturally hangs down. After a lot of McGuyver style attempts to complete the mask, I almost gave up. I was really having a hard time figuring out how it would all go, until I talked it through with my step-mom. She suggested attaching it to a hooded sweatshirt and then wrapping the feathers around that way to complete the rounded head. Voila! That’s what I did, and it worked great. I sewed the hood to the baseball cap, and then the edges of the hood to the edge of the mask. Around the hood, back and forth, I was able to add more feathers and bring them around the bottom the the mouth.

Once that structure was complete, it was time for the fun stuff~ the eyes, the nose, the teeth. For the eyes and nose, I wrapped the styrofoam balls in wool, needle felted them to give them a nice fuzzy look and glued them onto the head. I used black felt for the pupils, fun fur for the eyebrows, and marshmallows for the teeth.

Once Animal’s face was on, I felt so relieved! If I were to do it again, I’d needle felt the orange lips using orange wool, instead of the cut-out felt.

Here it is, all finished! 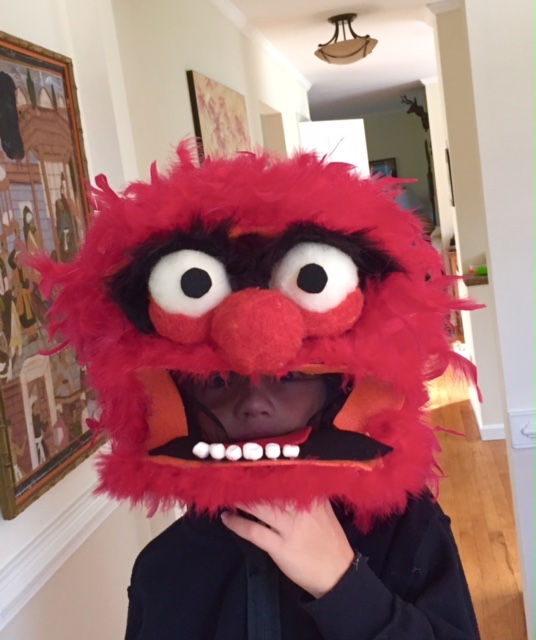 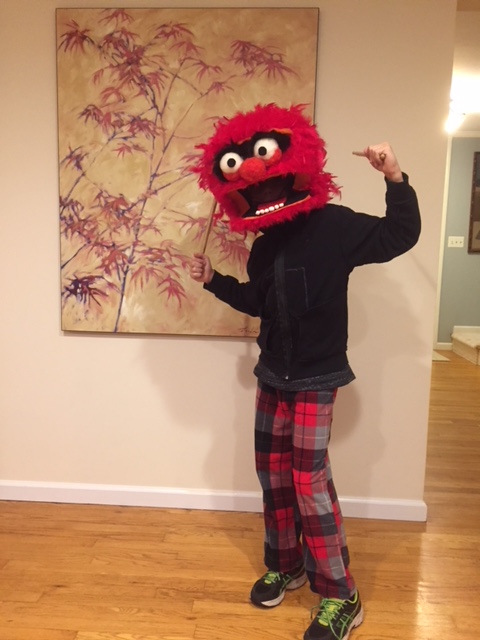 And here I am, having a loving moment with my Animal. 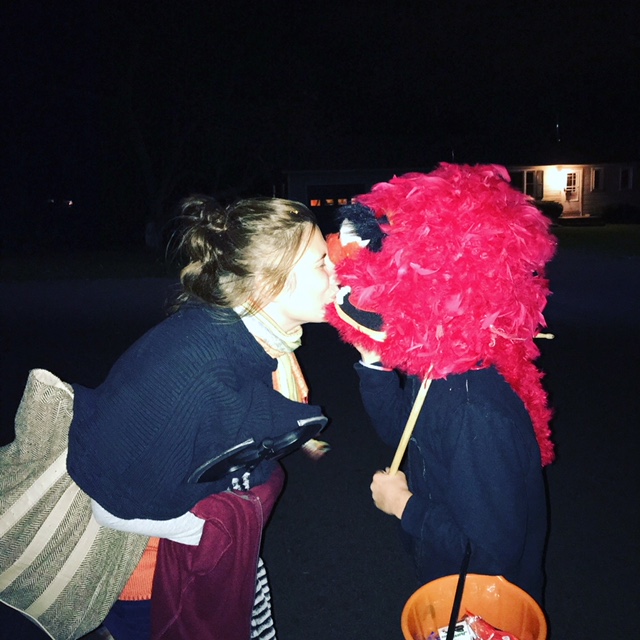 I hope you had a great Halloween!

I am a psychologist and a fiber enthusiast. I have a deep interest in the healing effects of handcrafting, and its place in our common histories.

6 thoughts on “A Very Muppet Halloween!”